Hyundai's Thierry Neuville says he is sure the language barrier that surfaced with co-driver Martijn Wydaeghe at Arctic Rally Finland can be resolved before the Croatian World Rally Championship round.

Wydaeghe's pronunciation of instructions at the snow event were hampered by intercom issues on Saturday morning's opening loop of stages, with this leading Neuville to second guess a number of corners.

But with the technical glitch cured, their persistence over the course of the Saturday afternoon stages was rewarded as they moved ahead of Craig Breen and Paul Nagle into third.

They cemented this position and went on to bag three additional points in the end-of-rally Power Stage.

"I'm very satisfied with our weekend and third position, even if second was so close," said Neuville, who finished 2.3 seconds behind runner-up, Kalle Rovanpera.

"We kept believing right up to the end.

"We have taken some good points for both [the drivers' and constructors' championships] which were really needed after Monte-Carlo.

"The partnership with Martijn, too, was better.

"We still have some communication issues to resolve, to get the wording clearer and for me to understand better, but I'm sure we'll be more competitive with that.

"We have a different communication system in the car. 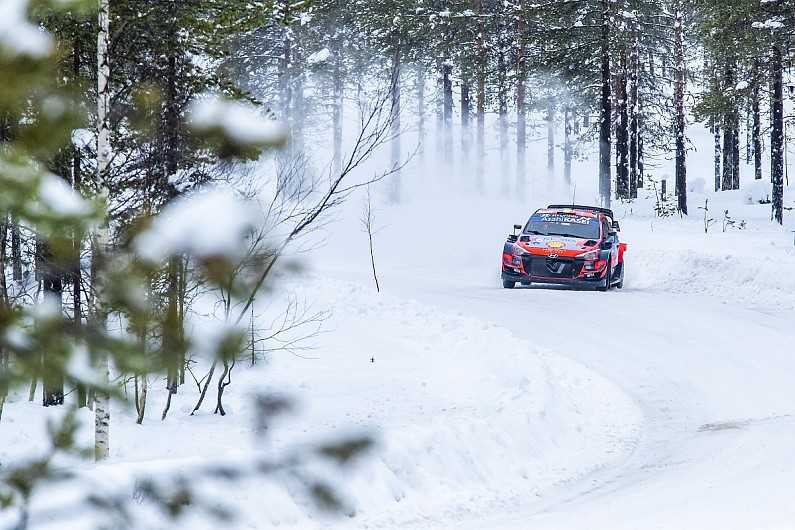 "It worked quite well with my former co-driver [Nicolas Gilsoul] but obviously Martijn is speaking French and his native language is Flemish, so sometimes already it's difficult for him to get the right pronunciation and combined with the intercom issue I struggled sometimes to clearly hear the difference between a 50 and a 75 [speed corner].

"Every time I was hesitating. There were a couple of 'moments' due to that, but also a couple of places where I lost time because I understood the corner was slower than it [actually] was."

Neuville also revealed that he is now at a point where he feels at one with the Hyundai i20 Coupe WRC.

"It's been a long time [since] I've enjoyed driving it as much as [I have done] this weekend," he said.

"The car was working just fine - I had no complaints. It did exactly what I wanted it to do and I just feel comfortable despite some really challenging stages [in Arctic].

"We had a trouble-free run in the car with no mistakes, the car was working well and the team has done an incredible job.

"They gave us the opportunity as well to go testing a lot before this event and it finally worked."