Valentino Rossi begins the next chapter of his illustrious MotoGP career as he makes his first public appearance with Petronas SRT at its team launch ahead of the 2021 season.

Remarkably, 2021 will be Rossi's 26th season in the grand prix racing - having made his full-time 125cc debut in 1996 - and his 22nd in the premier class.
Rossi's scorecard in MotoGP is legendary, the Italian amassing seven world titles, 89 race victories, 55 pole positions and a total of 199 podiums.

The latest of those podiums came last season in the baking heat of the Andalusian Grand Prix at Jerez, when Rossi showed there's life in the old dog yet with a third-place finish on his factory Yamaha.

Ahead of the 42-year-old's latest team launch with his new outfit SRT, Autosport has decided to look over Rossi's other team moves throughout his MotoGP career. 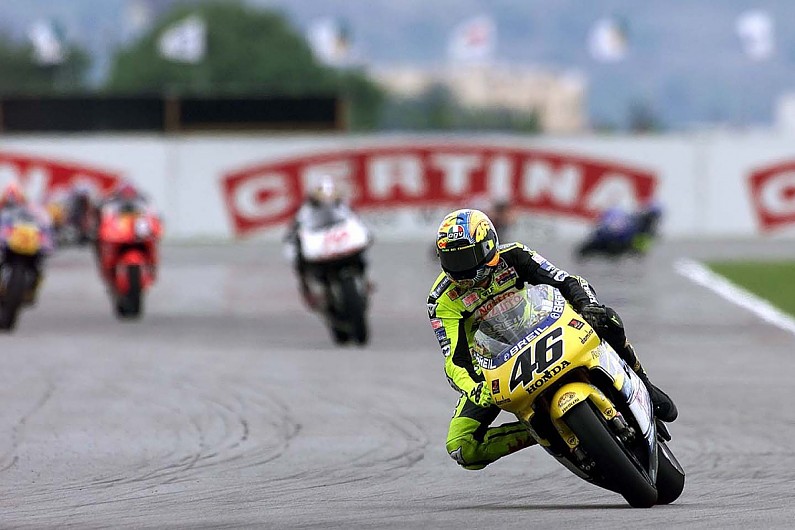 After winning the 1999 250cc world championship, Rossi made his premier class debut in 2000 with Honda.

Honda's works team line-up was already full, so Rossi was placed on a works NSR500 at a team run by Honda Europe in Nastro Azzurro colours.

Fully up to speed on how to tame the snarling two-stroke 500cc beasts for his sophomore campaign, Rossi dominated the 2001 campaign.

Rossi won 11 grands prix on his way to the first of his seven premier class crowns, beating arch rival Max Biaggi in the championship by 106 points.

The 2001 season marked the last time Rossi would ride as a satellite entrant until he throws his leg over his SRT Yamaha for the first time in March. 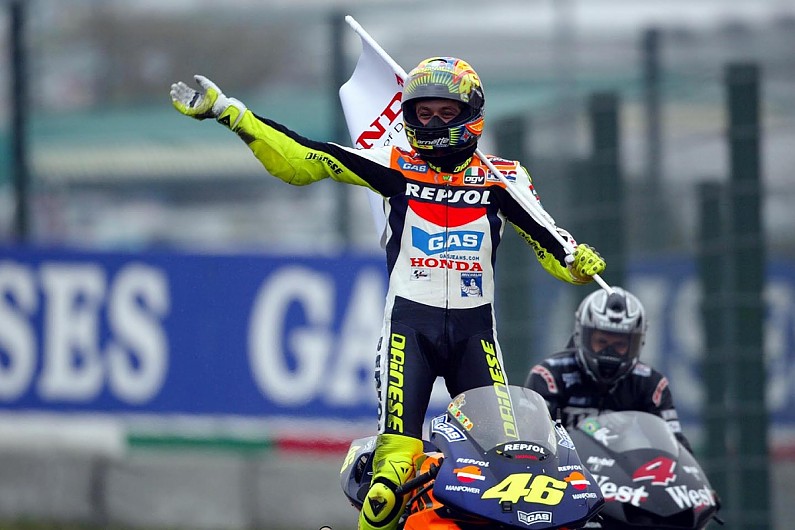 For the 2002 season, Rossi was finally decked out in Honda's iconic Repsol colours as he officially became an HRC factory team rider (though in truth it wasn't exactly a new team change).

At the dawn of MotoGP's new four-stroke era, Honda came out of the blocks swinging with its RC211V, and in the hands of Rossi in 2002 won 11 times.

In fact, Rossi finished every race bar one inside the top two, which meant his points margin at the end of his third title-winning season was a whopping 140 over Yamaha's Max Biaggi.

Rossi was in similarly imperious form the following season, winning nine times and finishing every race of the 2003 campaign on the podium.

The Italian eased to his fourth title, this time beating Sete Gibernau on the Gresini Honda, by a margin of 80 points.

But this would be the final year of Rossi's relationship with Honda, as the all-conquering partnership of the new millennium crumbled away.

Disenchanted at Honda, Rossi made the shock decision to sign for Yamaha for 2004, and so for the third time in his premier class career he'd be donning new leathers. 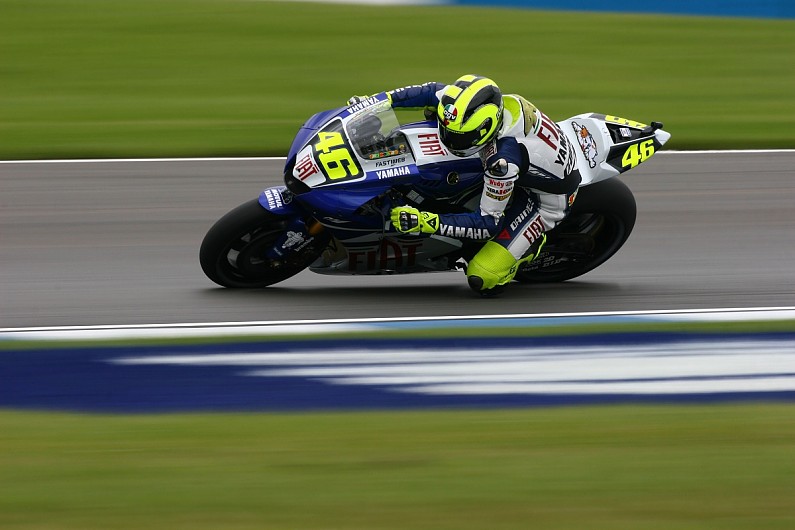 Following a winless 2003, then-Yamaha team manager Davide Brivio pulled a blinder in convincing Rossi to join the Japanese marque from rivals Honda for 2004.

As his relationship with Honda soured, Rossi made the jump to the M1 - though Honda didn't make it easy. HRC held him to his contract period, meaning Rossi couldn't ride the Yamaha until the new year.

Allowed to take his famed technical crew - helmed by crew chief Jeremy Burgess - with him to Yamaha, Rossi assuaged all fears he'd made a mistake by beating Honda-mounted Max Biaggi to victory in the opening round of 2004 in South Africa.

Rossi would win another eight races that year to claim his fourth MotoGP title, adding another to his haul in 2005 in a season most remembered for the bitter rivalry he had with Sete Gibernau.

The 2006 season was tougher for Rossi, the Italian winning just five races, which was his lowest haul since his debut campaign in 2000.

Numerous crashes, one at Assen in practice leaving him with fractures in his hand and foot, hindered his charge and he would lose the title to Honda's Nicky Hayden in a dramatic finale in which Rossi fell from his Yamaha in the early stages.

In 2007, he would lose the title again, this time to Ducati's Casey Stoner, who romped to the crown with 10 victories while Rossi managed just four - an off-track tax evasion case, which was eventually settled out of court, detracting his focus on-track. 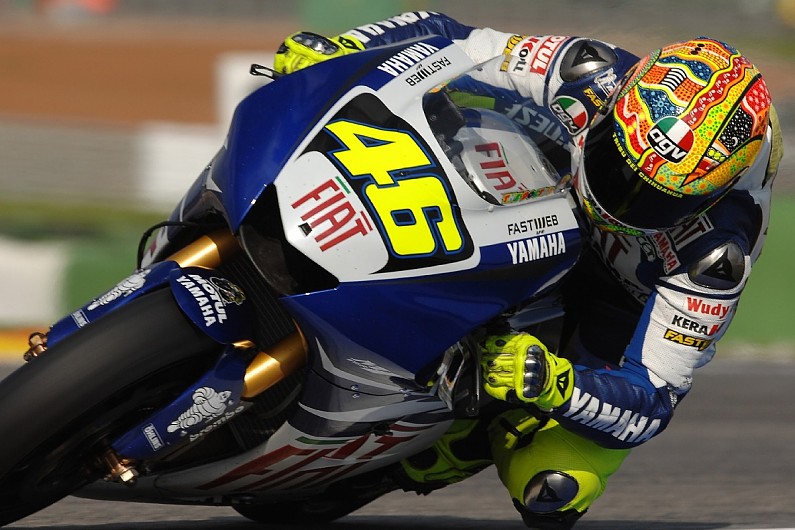 Rossi bounced back emphatically in 2008, winning nine races on his way to his sixth premier class crown - though now he had a new threat from within.

Yamaha had signed double 250cc world champion Jorge Lorenzo to join its ranks for 2008, agreeing deal back in 2006.

Rossi had a wall erected in the Yamaha garage for 2008, ostensibly to stop tyre secrets flowing from his side to Lorenzo's - as the latter was on Michelin's while Rossi had Bridgestone rubber.

The wall remained for 2009 and the rivalry intensified, most notably at the Catalan GP, where Rossi pipped Lorenzo with a daring last-corner move to claim victory.

He would win six times in 2009 to win his seventh MotoGP title. A broken leg suffered in practice for the Mugello round put paid to his 2010 hopes, though a pre-season shoulder injury was also hindering him.

Rossi won twice in 2010, but the relationship between himself and Lorenzo continued to deteriorate and the Italian made a big-money move to Ducati for 2011. 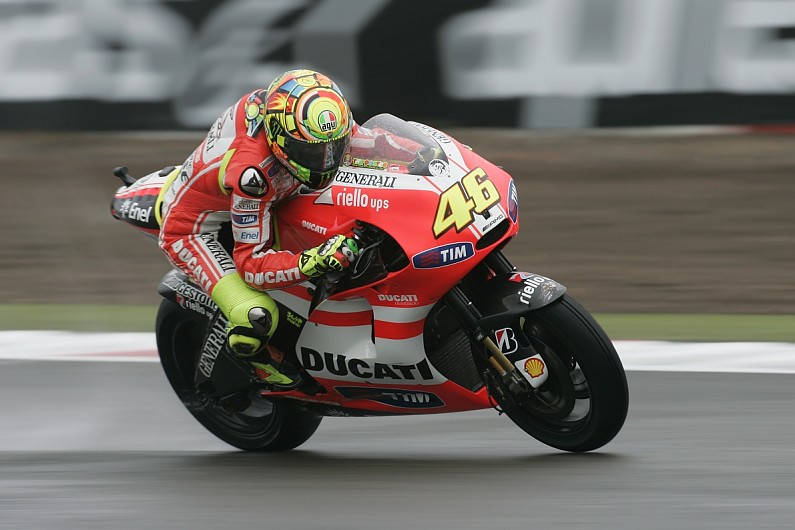 Rossi fulfilled the dreams of all Italian MotoGP fans when he signed for Ducati for 2011. But from his difficult first test of the Desmosedici, it was clear this would quickly become a nightmare.

He would score just one podium all season with a third-place finish at the French Grand Prix. In the end, he registered his worst championship position to date with seventh in the standings.

Meanwhile, the man he replaced at Ducati - Casey Stoner - romped to his second title with 10 victories.

Ducati moved away from its carbon fibre chassis to a more conventional aluminium frame as was requested by Rossi, but results failed to improve much - not helped by Rossi's crew and Ducati engineers not working well with each other.

Rossi scored two podiums in 2012, but his time with Ducati was not destined to carry on much longer and Yamaha offered him a chance to return to its factory squad for 2013.

Unsurprisingly, Rossi jumped at the opportunity. 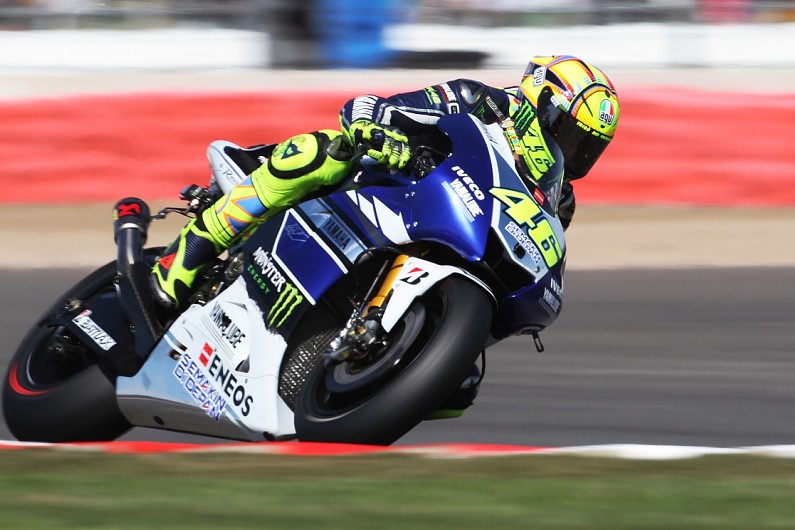 Rossi's return to Yamaha quickly laid to rest any notion the nine-time grand prix world champion had lost his touch, as he stormed to second in the opening round of 2013 in Qatar.

He would return to winning ways later that season at Assen, marking his first grand prix victory since Malaysia 2010. However, it wouldn't be until the second half of 2014 when he would repeat the feat.

Rossi won twice in 2014, and a total of 11 other podiums put him second in the championship, laying the foundations for a proper title charge the following season.
Rossi and Yamaha team-mate Jorge Lorenzo locked horns over the 2015 title, with Rossi winning four times to Lorenzo's seven.

Evenly matched for most of the campaign, the war went down to the wire in Valencia, though by now the title race had descended into chaos.

Several collisions with Marc Marquez through the season soured their relationship, and when Rossi accused the Honda rider of sabotage for allegedly conspiring with Lorenzo to help him win the title in Malaysia, all hell broke loose.

Rossi and Marquez infamously collided in the Sepang race, Lorenzo called for a harsher punishment, while Rossi was handed a back-of-the-grid start for the finale in Valencia.
To this day Rossi still believes he was conspired against. Whatever the truth, 2015 would prove to be the closest Rossi has gotten to winning a 10th world title since. 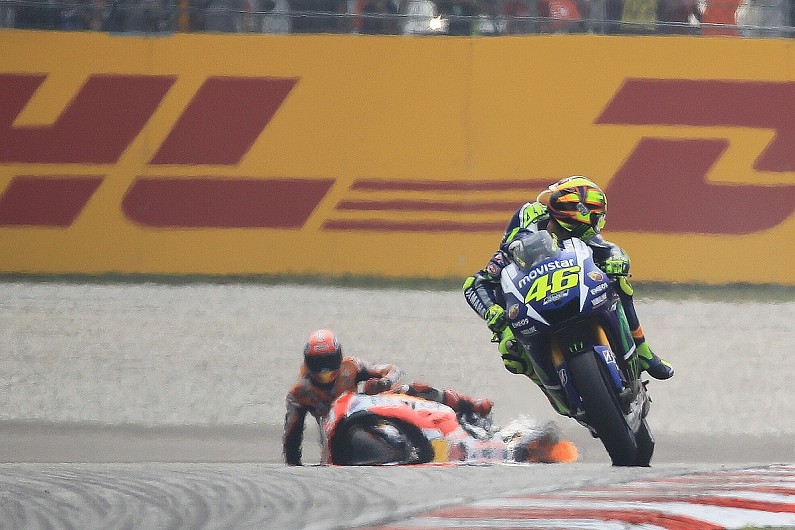 He won twice in 2016 and once in 2017, with his Dutch TT success his most recent success. Rossi's haul of podiums has also thinned in that time, going from scoring five in 2018 to just two in 2019 and one last season.

Unwilling to make a commitment to Yamaha for 2021 at the start of last year until he'd seen how his results were, the Japanese marque had no choice but to move him out of its factory line-up for this year to beat back Ducati from signing Maverick Vinales and Fabio Quartararo.

With the COVID-19 pandemic causing a major calendar reshuffle, Rossi felt no choice but to carry on in 2021 - though feels his early-season results, which included his 199th podium, would have satisfied his own criteria for continuing had 2020 run as normal.

Remaining a works-supported rider on current-spec machinery in 2021, Rossi will continue his MotoGP career with Petronas SRT for one more year at least. 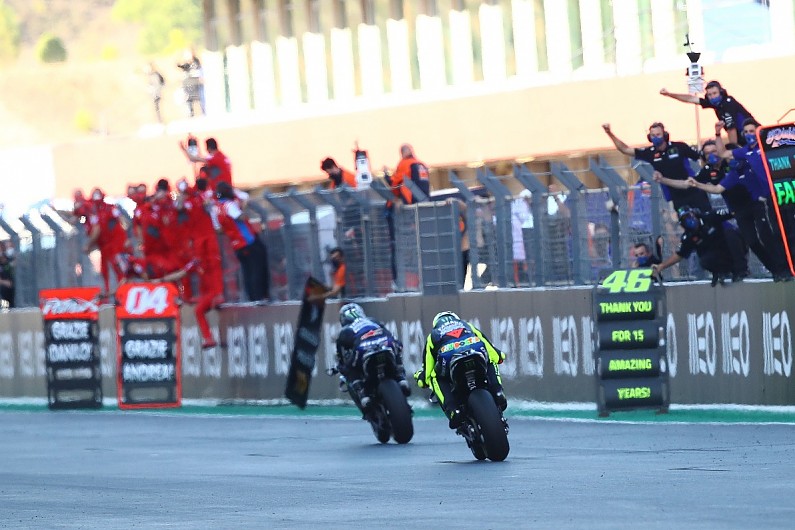