Dutchman VeeKay, who earned rookie of the year laurels in 2020, lapped the 2.38-mile course in 66.518s to go 0.115sec faster than Sebastien Bourdais of AJ Foyt Racing, although the Frenchman held top spot without use of the push-to-pass overtake.

Rookie Grosjean was slowest of the cars in attendance in his first time in a car since his Bahrain Grand Prix crash last November and logged 83 laps. His best time, a 67.478s, was just 0.9s slower than Dale Coyne Racing team-mate Ed Jones, the 2016 Indy Lights champion making his series return after a one-year hiatus.

Grosjean had a spin at Turn 1, but professed himself happy with the day's running, saying "it really felt like home at the beginning".

Graham Rahal turned a marathon 141 laps and finished as the top Honda-powered driver in the test in third for Rahal Letterman Lanigan. His team-mate Takuma Sato, a winner at Barber in 2019, was only 11th fastest.

All four Team Penske drivers were in attendance, with 2011 and 2012 Barber winner Will Power quickest of the quartet in fourth place. 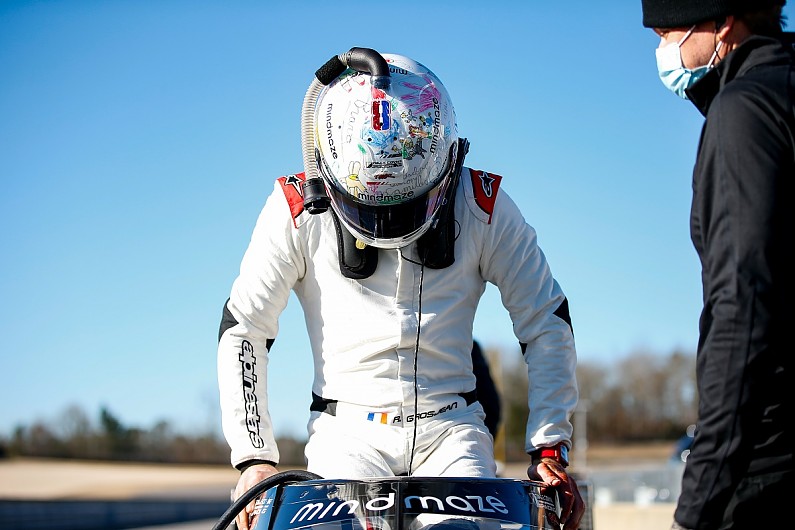 The New Zealander had tested at the Alabama circuit last November, and remarked that "it makes a difference going to a track that you know".

"We've put a lot of effort in behind the scenes, myself and my engineer Jonathan [Diuguid], to figure out what I want from the car and what everyone else wants from the car," he said.

"So this was a really good day, quantifying a lot of things. It was a test day but we treated it as one big practice session for the race weekend."