Mercedes' Raffaele Marciello put in a second flawless drive in as many days to secure the FIA GT World Cup crown in Macau.

Like Saturday's qualifying race Marciello against faced competition from a pair of Porsches, Laurens Vanthoor leading the charge for the Rowe squad after getting past team-mate Earl Bamber on the opening lap.

Vanthoor and Bamber were initially unable to do much about the leading Mercedes, Marciello holding an advantage of eight tenths over the first four laps.

But the Porsches were handed a second chance to attack Marciello, when the race was neutralised by a safety-car period after sixth-placed Kevin Estre hit the wall at Mandarin.

The stoppage set up a thrilling lap-eight restart, Vanthoor brushing the back of Marciello at Lisboa as he made a bold, but ultimately unsuccessful, play for the lead.

At the same time Bamber came under fire from Augusto Farfus who, having been more than four seconds behind the leader before the safety car, used his M6's superior straightline speed to briefly pull clear of the third-placed Porsche on the run to Lisboa.

It was only a brave move from Bamber into the iconic right-hander that restored the top three order, with Farfus then dropping more than three seconds on the restart lap alone.

From there it was a similar story as the first stint, Vanthoor stalking the Mercedes but seemingly unable to mount a genuine challenge for the lead.

On lap 13, with the gap now over a second, the Rowe Porsches swapped positions to give Bamber a shot at Marciello.

The Kiwi quickly closed to within a second, only for the gap to blow back out to 1.5s after a mirror-smashing glance of the wall at Police with a few laps to go.

He then made one more charge on the final lap, getting close enough to nudge the back of Marciello's AMG at the Melco Hairpin.

But there was no way through, Bamber conceding defeat at R Bend and slowing to let Vanthoor move back into second place. 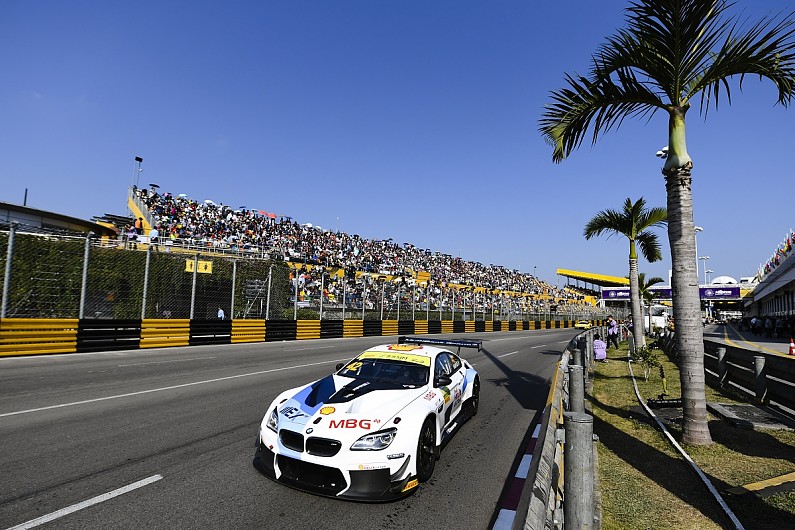 Farfus ended up best of the rest in fourth, a crushing 23s behind the winner, followed by Audi driver Chris Haase and Edoardo Mortara, who put in an impressive charge from the back end of the grid after his Saturday crash.