Maximilian Guenther believes he and BMW Andretti were let down by a lack of one-lap pace in Formula E's season-opening races in Riyadh last weekend.

While Mercedes, Audi and Porsche all raced at the front of the pack in the Diriyah E-Prix double-header, BMW had a subdued weekend in Saudi Arabia, with neither Guenther nor rookie team-mate Jake Dennis scoring a point.

Guenther and Dennis qualified a mediocre ninth and 14th respectively for the first of the two races, but BMW's one-lap pace deficit was highlighted further on Saturday when Guenther could only set the 12th fastest time in qualifying - despite having the advantage of taking part in Group 4 and a reduced field amid the absence of four Mercedes-powered cars and the Porsche of Andre Lotterer.

Guenther said he could be satisfied with the speed BMW showed in long runs, but believes qualifying was an area of weakness for the German manufacturer in Riyadh.

PLUS: How Andretti is planning for life after BMW

"Obviously we are not strong in one-lap pace, this is very clear," Guenther told Autosport. "We need to understand this for the next races.

"Qualifying is always key in any racing series, especially here when you race on street circuits. Obviously that's the most important [thing] and that's what you need to focus on in the championship.

"In terms of race pace I think it's a bit better. Not saying we are the strongest but it's definitely better and more competitive. Both Friday and Saturday we were able to fight for points and that's the situation at the moment." 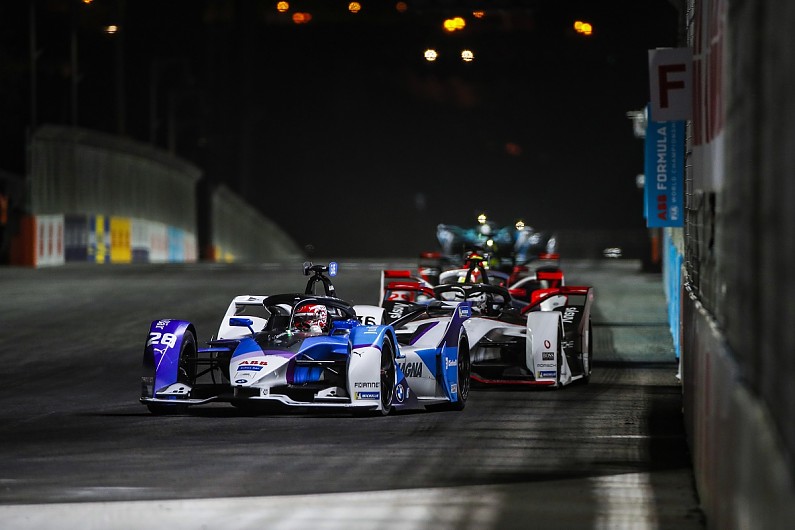 In the opening race Guenther was running inside the points in sixth when he clipped the barriers at the exit of Turn 2 on cold tyres after a safety car period, retiring immediately from the race.

Another DNF followed on Saturday when battling with the Nissan of Oliver Rowland, as he outbraked himself into Turn 18 and collected the NIO 333 of Tom Blomqvist that had been running just ahead of him.

The German driver will carry a five-place grid penalty at the next round in Rome in April after being found guilty of causing a collision by the race stewards.

Asked to explain the incident from his point of view, Guenther said: "I was running in I think P10, P11, fighting for points.

"I was in standard mode, I had used both my attack modes already. Ollie Rowland behind me was in his attack mode. I tried to cover him in Turn 18, [but I] drove off on the inside, braking in the dust.

"I don't know exactly at the moment what happened, if there was any contact or not [between me and Rowland]. Finally when I touched my brakes I immediately locked the fronts and was a passenger at this point, had contact with the car in front and it was the race for me.

"Obviously disappointing to not score any points but that's racing sometimes you need to accept this and move forward."