Vergne and da Costa once again came to blows in their time as stablemates, with the pair banging wheels as da Costa tried to prevent Vergne's attempted pass around the outside.

Da Costa appeared aggressive in his defence of what was fourth place, pushing Vergne out wide, leaving the French driver fortunate not to skate out wide into the barrier.

The two drivers notably clashed in the Santiago E-Prix last year and in the following race in Mexico City when the DS Techeetah team was slow to swap track position.

Vergne said of the battle in Saudi Arabia: "When you are team-mates you try not to waste energy fighting each other.

"After the first full-course yellow he had the attack mode and I let him by - lifting earlier so that he could catch the guys in front using the attack mode.

"Then I was behind him and I had more energy.

"At some point, I went back in front to attack, catch those guys and he just turned into me in the chicane and in the last corner. 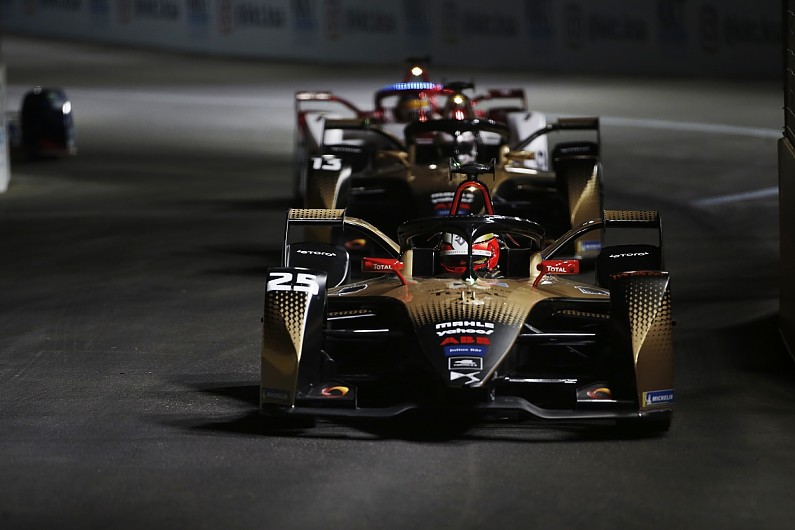 "When I turned in he was already there. [I went in a] bit too deep and I almost crashed in the wall at the exit of the last corner.

Vergne then maintained position to bring the DS E-Tense FE20 car home third in its final race but owing to a late safety car and red flag, he did not activate his second attack mode.

For this he has been handed a 24-second time penalty - in lieu of a drivethrough penalty - which has dropped him down to 12th and 29 seconds behind winner Sam Bird.

However, both drivers have been pinged for an additional 24s, having been caught exceeding the 50km/h limit enforced during the full-course yellow.

That was required for Jake Dennis when he stopped his BMW Andretti by the pit entry after the front-left suspension buckled as a result of being hit by Porsche driver Pascal Wehrlein.

In addition, Envision Virgin Racing driver Nick Cassidy has lost his standout fifth place in only his second championship race for also having sped while the race was neutralised.

All of these penalties from the FIA are final and not susceptible to appeal.