Jaguar Formula E driver Sam Bird came out on top in a long duel with former teammate Robin Frijns to win a truncated second leg of the Diriyah E-Prix.

Having left the Envision Virgin Racing team after six seasons with the British outfit, Bird won on only his second race appearance with Jaguar to continue his record of scoring one victory in every FE campaign so far.

Bird qualified third on the grid and immediately cleared the slow-starting Dragon Penske of Sergio Sette Camara, as Frijns led the field from pole position.

The gap between Frijns and Bird remained stable at 0.5s for the first half of the race, with the Envision driver able to repass the Brit after briefly falling behind him after arming his attack mode.

However, after admitting over team radio that he needed to save energy, Frijns' pace registered a visible drop, allowing Bird to pass him into Turn 18 on lap 21 and take the lead of the race.

Behind, DS Techeetah drivers Jean-Eric Vergne and Antonio Felix da Costa had made rapid progress up the order after starting seventh and ninth on the grid, and had closed right on the tail of Frijns' Envision.

Having initially cooperated during each other's attack modes, Vergne and da Costa came together while battling for the final spot on the podium on lap 23, with Vergne lucky to avoid the barrier at the outside of the final corner.

But, having escaped from the incident without any visible damage, neither could make a move on the struggling Frijns after the full course yellow was deployed when Maximilan Gunther locked up going into Turn 18, collecting the NIO 333 car of Tom Blomqvist.

The Mahindra of Alex Lynn later skated across the corner upside-down in an incident not shown on the TV feed, and it likely led to the deployment of the safety car before the race was red-flagged altogether with three minutes left on the clock.

With the race not restarted and results declared on the basis of the order behind the safety car, Bird was crowned the winner ahead of Frijns, with Vergne and da Costa classified third and fourth following their previous contact. 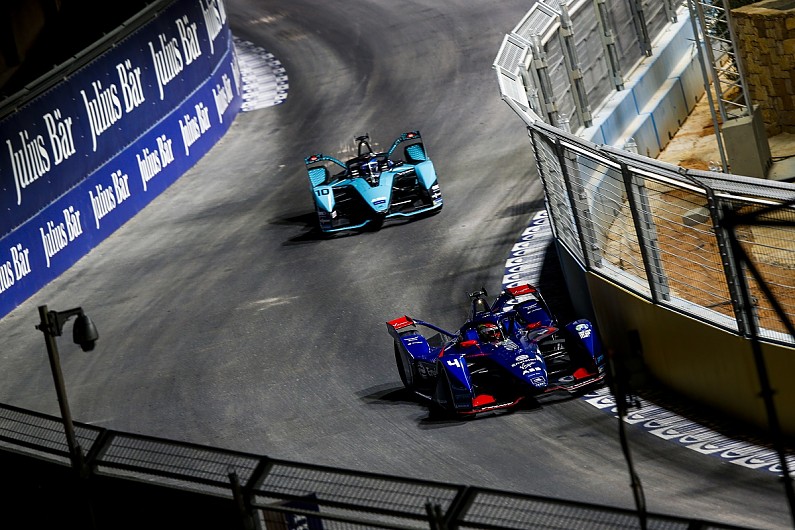 Nick Cassidy impressed further on his maiden Formula E weekend, charging from 10th on the grid to take fifth at the flag and finish as the top rookie.

The two Dragon/Penske cars were able to remain in touch with the leaders in the early part of the race before being overtaken by the two DS Techeetah cars and Cassidy's Envision entry, leaving Sette Camara and Nico Muller sixth and seventh respectively.

However, this still represented a massive upturn in performance for the outfit, which scored just two points in all of the 2019/20 season.

Oliver Rowland, again the top qualifier from Q1, was ninth in the sole remaining Nissan after teammate Sebastien Buemi stopped on tracks moments before the clash between Gunther and Blomqvist that effectively brought the end of the race.

Rene Rast, who failed to set a laptime in qualifying, took the final point in 10th for Audi, ahead of Mahindra's Alexander Sims.

Sims' teammate Lynn has been taken to hospital for evaluation following his crash towards the end of the race, and the British driver is conscious and talking.

Both Mahindra cars are also currently under investigation for an alleged throttle map infringement.

Neither Mercedes-powered cars were able to break inside the top 10 after being barred by the FIA from taking part in qualifying following Edoardo Mortara's crash in free practice.

Having been given the permission to take part in the race following software changes, Friday's race winner Nyck de Vries finished 14th in the lead works Mercedes, one place ahead of Venturi's Norman Nato.

Stoffel Vandoorne was last of the classified finishers in 18th after taking a stop/go penalty for a technical infringement.