Robin Frijns landed a maiden Formula E pole for the second Diriyah E-Prix as the top four from Friday's opening race all failed to complete a flying lap.

The Envision Virgin Racing driver was last to run in the superpole contest and bolted to the top with a 1m07.889s effort to move 0.289s clear.

In addition to topping the final free practice session, it means every session so far in Saudi Arabia has been topped by a Dutch race, but race one winner Nyck de Vries was absent for qualifying as Edoardo Mortara's practice crash had a huge knock on effect for the Mercedes-powered cars.

Both Mercedes cars and customer powertrain team Venturi Racing were not allowed onto the track while the FIA waited to more firmly diagnose the cause of the crash that required Edoardo Mortara to be taken to a local hospital for a precautionary assessment.

Sergio Sette Camara carried over his excellent one-lap pace that he brought to the table in his Berlin E-Prix cameos, as the group four runner delivered a spectacular superpole lap - despite several spikes of oversteer - to snare a front-row start.

Jaguar Racing's Sam Bird also made good use of group four, the result of a race-one crash with Alex Lynn, to progress into the top six fight. But the "worst sector two" of his weekend meant third place was the best he could do.

The marked improvement made by the NIO 333 team that finished last season without a point came to the fore in qualifying. Both drivers Oliver Turvey and Tom Blomqvist climbed out of the group stages to bag fourth and fifth spots on the grid.

An impressive one-lap showing from the Dragon Penske Autsoport promoted Nico Muller into superpole from his group four run. But first out on track in the competition for pole, his hot tyres meant he lapped significantly slower and would eventually start from sixth.

Double champion Jean-Eric Vergne was the first name to be shuffled out of superpole contention thanks to the final group effort of Sette Camara, Muller and Blomqvist.

The strong track evolution continued, leaving the DS Techeetah prey as Nissan e.dams rival Sebastien Buemi was another to be relegated from the top-six shootout in eighth.

Alex Lynn could not put the advantage of running in group four to good use and lines up ninth ahead of defending champion Antonio Felix da Costa, who messed up his best effort thanks to a lock up on the approach to Turn 21.

Nick Cassidy topped the rookie riders in 11th for Envision Virgin Racing, ahead of Maximilian Guenther - needing to recover from crashing out in race one - and Oliver Rowland.

Nissan e.dams driver Rowland blitzed the opening group run, crossing the line to start his flying lap with only tenths to spare. He ended the cluster on top by a massive 0.8s over Porsche's Pascal Wehrlein. 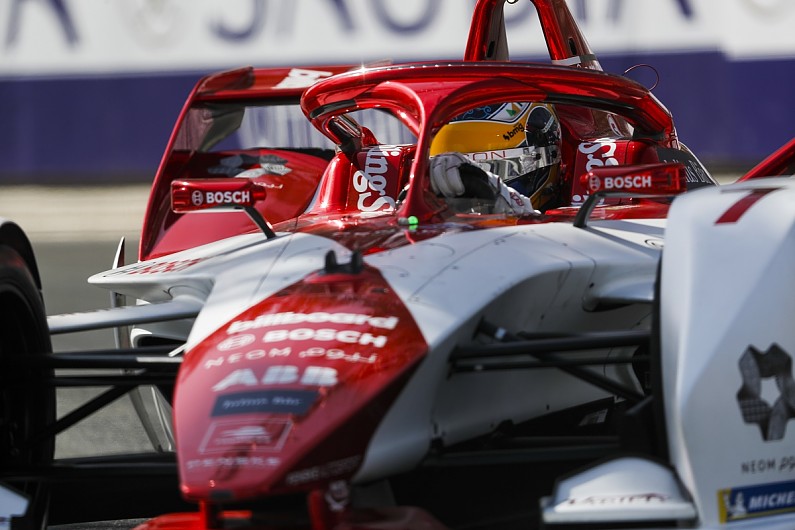 That huge gap created space for Alexander Sims and Lucas di Grassi to split them.

Mitch Evans and Rene Rast, who finished third and fourth in the first race, were high profile and early casualties as their Jaguar Racing and Audi teams were caught out by the shorter qualifying group stages.

Slashed from six to four minutes for 2021, they trailed Rowland on their 200kW preparation lap and failed to cross the line in time to set a flying run. They will start from 18th and 19th respectively.

For Evans, this marks the second time in a year his team has botched the shootout, with the Kiwi also failing to post a laptime in Marrakech, which came immediately after dominant Mexico City win.

In that race, Evans recovered strongly from 24th and last to sixth place.

Alongside the incident for Rast and Evans, all Mercedes-powered cars and crash damage for Andre Lotterer left five drivers absent for the duration of the shootout.