Having set the fastest times in both practice sessions as well as the group qualifying, de Vries upped the ante in superpole, beating the Porsche of Pascal Wehrlein by six tenths of a second.

The 1m08.157s time set by the Dutch driver was the fastest of the weekend so far, and comfortably the quickest in the history of the Riyadh Street Circuit following a reprofiling of certain corners and a resurfacing of the track itself.

Audi's Rene Rast qualified a strong third at the start of his first full Formula E season, finishing just under half a tenth behind fellow German Wehrlein.

Edoardo Mortara was left on the back foot after losing more than half a second in sector one, but he recovered strongly in the final part of the lap to qualify fourth for Mercedes customer Venturi, ahead of the lead Mahindra of Alex Lynn.

Mitch Evans put Jaguar back in superpole but a brush with the wall at the exit of Turn 17 left him down in sixth, nearly a second off the pace of polesitter de Vries.

Porsche's Andre Lotterer was the fastest driver not to make it into superpole and will start seventh, ahead of Sam Bird, who will line up eighth on his first race with Jaguar.

Maximilian Guenther was ninth for the BMW Andretti team, while Oliver Rowland was the best qualifier from Group 1, ending up 10th quickest ahead of Mahindra's Alexander Sims.

The two DS Techeetah cars qualified near the rear of the pack following a horrific qualifying session for both Antonio Felix da Costa and Jean-Eric Vergne.

Already handicapped by being placed into Group 1, both drivers left it until late before heading onto the track and were then caught out in traffic, with the sextet crossing the line virtually nose-to-tail. 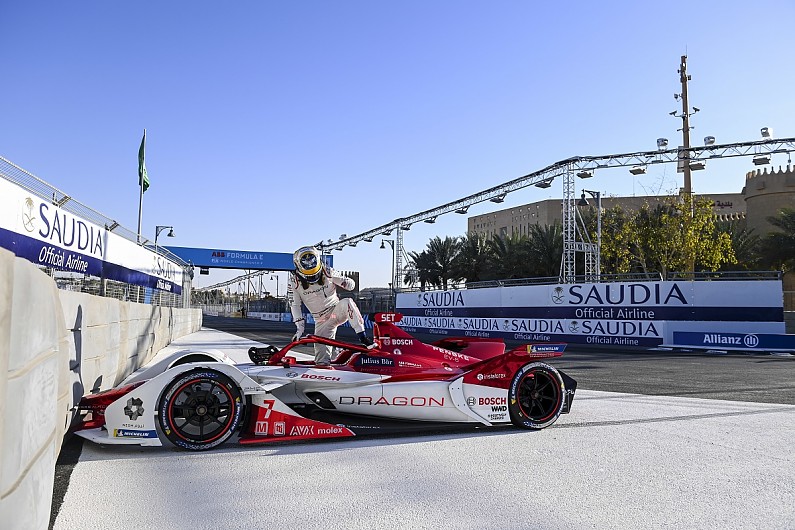 Vergne lost further time by running wide at the final chicane and ended up 2s off the pace in 19th, just behind team-mate da Costa.

Stoffel Vandoorne qualified 15th for Mercedes after starting in Group 1.

Both Nick Cassidy and Nico Muller originally made it to the superpole, but had their fastest laps deleted for improving under the yellow flag caused by the crashed Dragon of Sergio Sette Camara.

That left Cassidy and Muller down in 20th and 22nd respectively, separated by the NIO 333 of Tom Blomqvist - who provisionally qualified seventh before losing his time for the same infringement.

Robin Frijns failed to make it to qualifying after the Envision Virgin team had to change the battery on his car following his crash in FP2 this afternoon.

He will start at the back of the grid, sharing the last row with Sette Camara.